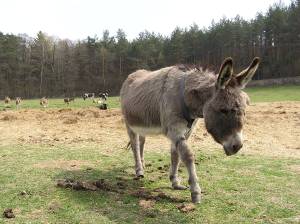 On Sunday we talked about Jesus’ triumphant entry. We talked about how he enters into Jerusalem riding a donkey, symbolizing that his power works differently than the world’s power of might, greed, position, and conquering. Jesus didn’t ride a warhorse emphasizing his superiority, but a donkey emphasizing his humility.

But even as he was riding into Jerusalem in humility, he was still riding into it to rescue the people. The people shout “Hosanna”, save us now. And Jesus was bringing rescue to them although in a way they never would have expected. That’s because while Jesus does rescue and save, he does it in his way and not in the way of the world.

Jesus rescues and saves through submission, sacrifice, and surrender, not through military might, wealth, or positional power. Jesus’ power operates in a way that is distinctly different than the way of the world.

The challenge for us is to not simply believe in what we can see with our eyes, but what we can trust with our hearts. The challenge is to not simply search for Jesus in spectacles and the sensational, like Pilate and his parade of power, but also in the simple and significant ways of life. Jesus rides a donkey. He’s not riding something flashy and showy, but humble and true.

And today if you need rescue from something: a work, health, financial, or a relationship situation, then shout “Hosanna” and ask for Jesus to save you.

Just remember he saves in his way, and not the world’s. But that through saving and rescuing us in his way – he rescues the whole world.