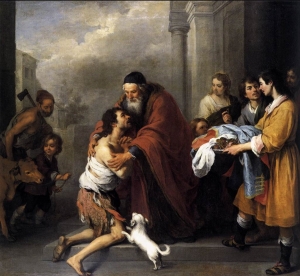 Jesus here is teaching to two specific groups mentioned in the text. The first are the crowds, the broken, the tax-collectors, and the sinners. In the story the parable of the younger son reaches out to them. To the ones who have broken the rules and are far from the Father’s embrace.

There was a second audience though as well: the Pharisees and Teachers of the Law. To this group Jesus tells the second half of the story of the older son. A son who was lost because he kept all the rules and like the younger son was also far from the Father.

The Older Son is clearly lost because being lost isn’t about location but intimacy with the Father. When the Father welcomes the younger son home, the older son stands outside and refuses to join in the celebration. He refuses to join in with the Father. He creates distance between the two of them. And the reason why he is standing outside is actually stated by the older son. He says that he is outside and refusing to go in because he has never disobeyed the Father.

And it is precisely at this moment that we see how keeping the rules can keep us from the Father and God. Because the older Son reveals that he has been following the Father not because he loved the Father, but because of what he could get out of the Father.

Timothy Keller puts it this way:

“The hearts of the two brothers were the same. Both sons resented their Father’s authority and sought ways of getting out from under it. They each wanted to get into a position in which they could tell the father what to do. Each one, in other words, rebelled – but one did so by being very bad and the other by being extremely good. Both were alienated from the father’s heart; both were lost sons…Neither son loved the father for himself. They both were using the father for their own self-centred ends rather than loving, enjoying, and serving him for his own sake. This means that you can rebel against God and be alienated from him either by breaking his rules or by keeping all of them diligently”

The point is that it is possible to distance ourselves from the Father by breaking the rules and by trying to keep them out of the wrong motives. If we follow the commandments of God so that God owes us, so that we guarantee blessing, or that our lifestyle and desire are assured, we are missing the point. To follow God for any other reason than God is worth following is to miss the point and miss God.

So on Sunday we gave three ways to discern our motives in following God. The first was do you expect to get what you want. If your life is built on the expectation that God will create the life you want, rather than the life he is calling you to lead, that might indicate an older brother’s heart.

Secondly, an older brother’s heart can be seen when there is grudging duty in following God. If we follow God out of a sense of obligation rather than anticipation for the kingdom we may be missing the point. We are called to give our hearts freely to God, not out of a twisted sense of resentful compliance.

So on Sunday we concluded our talk by asking each person to examine why they follow God. And if there is, we gave this simple next step: join the party. The Father comes out to the older brother and invites him back into the party. So if for any reason, like resentment, bitterness, self-righteous, or pride – you’ve missed out on the party, make a choice to accept the invitation, put aside everything and join the party. Because the truth is the party with the Father is where we want to be.

If, like the elder brother, you seek to control God through your obedience, then all your morality is just a way to use God to make him give you the things in life you really want” Timothy Keller

Big Idea Why are your following God?

Discussion Questions for Young Families: Take a moment and talk to your kids about why its important that they follow your guidance and direction. Then take a moment and talk to them about how its even more important about the motives behind their actions. Tell them how happy it makes you when they clean the dishes because they love you. Tell them how much joy it brings you when their heart is in the right place.