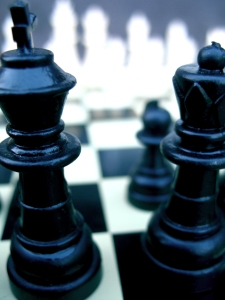 That’s what I hope to change on Sunday.

Regardless of your belief in supernatural evil or Satan, the truth is we have all experienced the reality of Satan. What I mean by that is that we each have at some point probably come under an attack of fear, temptation, accusation, depression, confusion, or worry. We each have probably experienced darkness in some shape or form in our lives. And on Sunday I want to reveal how those things happen, so that we might be recognize them, and most importantly overcome them.

So that’s where we are going on Sunday. Discovering the tactics and strategies of the enemy so that we might live freer, deeper, and wholer lives.

And to discover the answer to this question of what the schemes of the enemy are we are going to be exploring the first passage where he shows up visibly and prominently. We are going to explore Genesis 3. So this is the passage we will be reading on Sunday. Why not take a look at it and see if you can discern from it: what are the tactics of the enemy? Because the first step to overcoming them is learning to recognize them.

Now the serpent was the shrewdest of all the wild animals the Lord God had made. “Really”, he asked the woman, “Did God really say you must not eat the fruit from any of the trees in the garden?” “Of course we may eat fruit from the trees in the garden,” the woman replied. “It’s only the fruit from the tree in the middle of the garden that we are not allowed to eat. God said, ‘You must not eat it or even touch it; if you do, you will die.’” “You won’t die!” the serpent replied to the woman. 5 “God knows that your eyes will be opened as soon as you eat it, and you will be like God, knowing both good and evil. The woman was convinced. She saw that the tree was beautiful and its fruit looked delicious, and she wanted the wisdom it would give her. So she took some of the fruit and ate it. Then she gave some to her husband, who was with her, and he ate it too. At that moment their eyes were opened, and they suddenly felt shame at their nakedness. So they sewed fig leaves together to cover themselves.”