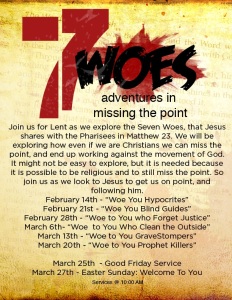 On Sunday we looked at the first “woe” of Jesus and opening up the series and the practice of Lent. I shared how Lent isn’t fun but necessary. Necessary because the truth is we as Christians need to challenge ourselves to live and look more like Jesus. Stanley Hauerwas writes this:

It is surely the case that many of us are kept from entering the kingdom by the lives we lead as Christians. Our problem is very simple – we simply do not know how to live as a people who believe that Jesus is the resurrected Lord.

And I believe that is true. Lent then is a time of re-centering on how to live like Jesus, appreciating his sacrifice, taking a hard look at our lives, and asking for challenge and conviction.

Lent also matters because it prepares us for Easter. We spend so much time preparing for Christmas but the true Christian holiday is Easter and I think we need to invest time and energy into that as well.

And lastly, Lent matters because it can save our faith. If you practice Lent then at least yearly you will go through a season that is slower, inward focused, repentance focused, and one that is a bit darker. And this matters because somehow we’ve bought into the illusion that the Christian faith is all light, rainbows, and sunshine. So when our lives turn dark, as can happen, we think we’ve lost of our faith. Lent reminds us that going through a dark time is actually part of faith.

So with that we kicked off our series beginning to look at the seven woes of Jesus found in Matthew 23. We focused in verse 13, and the first woe.

The first thing we realized was that the Pharisees weren’t bad people, they were people deeply desiring for God to move. And in many ways we slant the Pharisees in Christian circles so that they are different than us, but they really are very similar to us. And this is why then when Jesus condemns them we need to hear these words and apply them to ourselves. We need to make sure we are following Jesus, and not just our ideas about Jesus.

So Jesus says, “What sorrow awaits you teachers of religious law and you Pharisees. Hypocrites! For you shut the door of the Kingdom of Heaven in people’s faces. You won’t go in yourselves, and you don’t let others enter either.”

And in this Jesus starts to bring up the offensive reality of the gospel. That the gospel, or entering the Kingdom of heaven, isn’t offensive because of who it rejects but who it includes. The Pharisees were busy sharing who was in and who was out.  The difficulty is that the people they were rejecting were the people God was including. So Jesus comes to them and confronts them and says – you exclude people from God’s Kingdom (shutting the door), and then refuse to enter yourself. You not only bar other people from going in, but refuse to enter yourself.

Jesus throughout his ministry welcomed people into the Kingdom the Pharisees didn’t believe deserved to be there.  And the truth is that the people Jesus welcomed into the kingdom – tax collectors, prostitues, and sinners – didn’t deserve to be in the kingdom. And neither did the Pharisees. It was an act of grace and mercy.

So Jesus confronts the Pharisees for rejecting the people that God is including. But this isn’t about them, it’s about us. So we came to this  main point because we do the same thing the Pharisees do. The main point is this: God’s Kingdom and grace is bigger than all of us.

The question though is are we acting like the Pharisees? Are we barring people from entering? Are we excluding people God’s spirit is including? Would Jesus say to us, “Woe to you for shutting the door, on people I’m inviting in”? It’s a really important question, one that we landed and ended on.

I invited people to really reflect on that question. Are there people in our lives whom we are rejecting that God is including? Are you standing in the way of what God is doing? Do we have enemies that we believe don’t deserve God’s kingdom, or to be part of what God is doing – as they are?

So to make this personal and practical we ended with this challenge: to pray for our enemies daily. The truth is it’s hard to reject people we are daily praying for, and that is what will ensure we don’t stand in the way of God’s movement. So the challenge for all of us was simple: pray for our enemies and get out of the way for God to move. Because the Kingdom is bigger than we think, and God is inviting people in.

Big Idea: God’s Kingdom and grace is bigger than all of us.

What stuck out to you from the sermon? What was challenging to you? What was new? Have you practiced Lent before? Why or why not? Is there something you could give up this year for Lent? How have you seen in the past people getting in the way of what God was doing? How have you in the past excluded people God was including? Who are the people you need to pray for and work to include in God’s kingdom?

Talk to your kids about the reality that God’s kingdom is for everyone, even the people we struggle with and really dislike. Start to teach them to pray for those who are their enemies. Start to lead them to live like Jesus through prayer.

Challenge for the Week: Pray for our enemies daily.