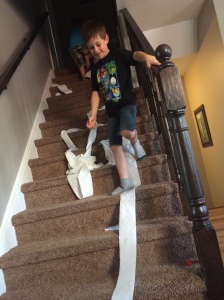 So I had this moment today when I realized I often want my kids to be perfect, rather than…well kids. And this happened when they had been quiet for quite a while, and I went to check on them and they were just giggling and giggling.

What I found was them racing toilet paper down the stairs in a giant mess.

But I realized honestly – they aren’t wrecking anything really, they aren’t being disrespectful, they are just being two boys playing with toilet paper. And it hit me sometimes in our quest to have our kids grow up well, we expect them to grow up too fast. In our desire to raise them well, we raise the bar too high. Sometimes we forget that seeing a stack of toilet paper to a kid is hours of fun.

So I write all this for one reason: enjoy those moments with your kids, grandkids, or neighbours. Don’t force them to grow up too quickly, acting like adults. Let them be kids and join in a bit.

So I gave them an extra roll of toilet paper, some tape so they could build a ramp, and then helped them clean it up in the end.